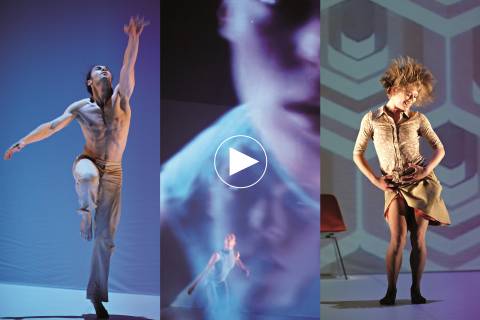 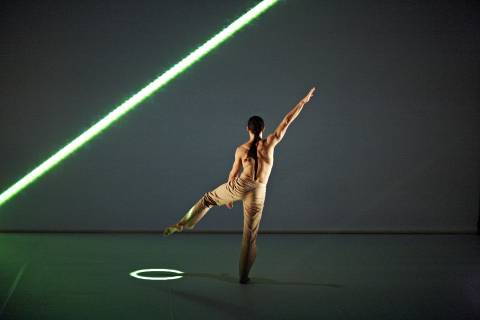 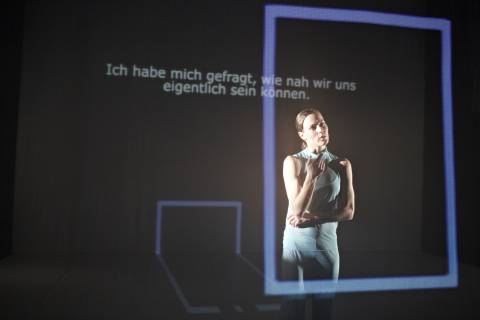 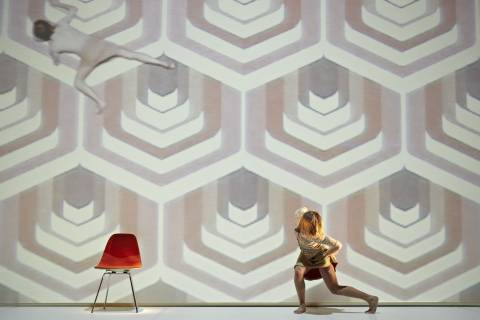 Using digital, incorporeal communication, man constantly creates a variety of different living spaces in which he can completely reinvent himself and his environment.

In virtual worlds, the dream of surpassing the given restrictions of physical reality seems to have come true: physical, temporal and spatial limits no longer exist - the human brain is creator of the rules in its own universe.

Presenting three different solos, "Into the Blue" draws a picture reflecting the future of the human body.

With subtle interactions between video projections and the performers, conceivable consequences of an existence on the edge between the tangible and the intangible, the concrete and the abstract, between body and idea are looked into.

A ›masterpiece‹ combining virtual images and real bodies in the most logical, as well as strikingly entertaining way.

Jan Puschs ›Projections on the move part I: Into the Blue‹, a sequence of three solos, is one of the rare examples of timeless choreography. It disrupts the the vision of the stage.

The entire space turns blue, turns into a screen, just like the dancer's body. Rectangles are flickering on Detlev Alexander's chest. He starts an interplay, makes them appear from underneath his hands and disappear again. What possibilities!

Dancer Fiona Gordon lives in a video world: the Persian rug and the wallpaper are projections. She herself is one, or maybe two. Her images are breaking away from her, crawling over the floor and walls. Time and space, future and reality are the central themes in Pusch's choreographies. "Into the Blue" continues the film in a most intelligent manner.

Pusch succeeds in peeling off multilayered levels of a dialogue - dance with space, the dancer with the self and the audience.

In all three solos the human body provides the best transparency for limitless projections - spoken in concrete terms as well as in figurative sense. "Into the Blue" is Jan Pusch's fascinating choreographed adaption of relevant questions we are all occupied with.

How much truth really lies in the body? The competent german choreographers for this are a Ruhr Basiner Thomas Lehmen (36) in Berlin, and Leipzig-born Jan Pusch in Hamburg (35). Both do not bore even for a second because they avoid a pack of smart answers.

Invited by the Goethe Institute to performances in India, Southamerika und Russia

projections on the move part I

dance solo for a single body

Please contact us for further information and video of the complete show.